Whoopie! there it is! 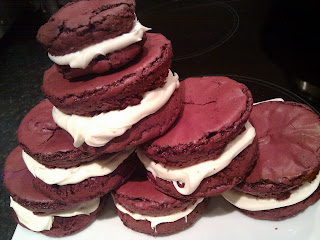 I walked into Starbucks yesterday and found out they now sell cake-pops and whoopie pies. The cake-pops didn't look that good, but the red velvet whoopie pies looked and tasted "delish".

So tonight I decided to do some whoopie pies, but since I had no buttermilk, red velvet was out of the question.

As usual, I improvised. 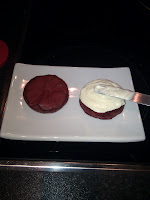 I made a simple brownie mix, but used only 3/4 of the usual amounts of vegetable oil and water to make the dough a bit thicker. Not fully satisfied with the red velvet fiasco, I added a teaspoon of red gel food colouring to the dough. And voila! Crunchy, chewy whoopie pies with basic vanilla frosting = delicious sweet snack!

Tip: use a whoopie pie pan if you have one, makes things much easier and pies look nicer ;)

I am a marketer by trade and a cake designer by hobby :) I work on designing fun and funky cakes and cupcakes on my 'occasional' free time. It all began in 2002 decorating birthday cakes for friends and the passion only grew stronger. Maybe some day, designing cakes will be my full-time job! For now, enjoy my blog, use my tips to try some cake decorating yourself and, if you live in São Paulo - Brazil, drop me an email (pat@pat-cakes.com) if you'd like to order a bespoke Pat cake ;) xx